Like clockwork, Apple brings a major update to its next-generation mobile operating system every year, and 2020 is no different. At its virtual Worldwide Developers Conference (WWDC) 2020, the company previewed many new features and enhancements that will be available in the next version of its mobile operating system, iOS 14.

Unlike iOS 13, which brought several improvements across the entire system to make your iPhone experience faster and more delightful, iOS 14 offers a fresh take on the things you do most often and makes your favorite apps even more intelligent and private. Let’s take a closer look at the new features and updates coming to the 14th major release of the iOS.

iOS 14 is currently in beta development and likely to be released to the general public in the fall of 2020. While Apple hasn’t released a specific release date, you can expect Apple to release iOS 14 between 14 and 18 September 2020 based on previous years. However, due to the COVID-19 pandemic, there are always chances for the actual release date to be pushed further back to next month.

iOS 14 introduces a variety of new features and enhancements to let you do more with your iPhone devices than ever. Let’s dive right into key updates:

The most noticeable change: Apple has introduced a new design for the Home Screen, allowing you for far more customization and helping you navigate through your iPhone faster than before.

Forgot swiping through your home screen to find your favorite app. iOS 14 introduces the new App Library that automatically organizes all of your installed apps into a simple view that is pretty easy to navigate. Using the search bar at the top, you can also switch to a list view where apps are displayed in alphabetical order. 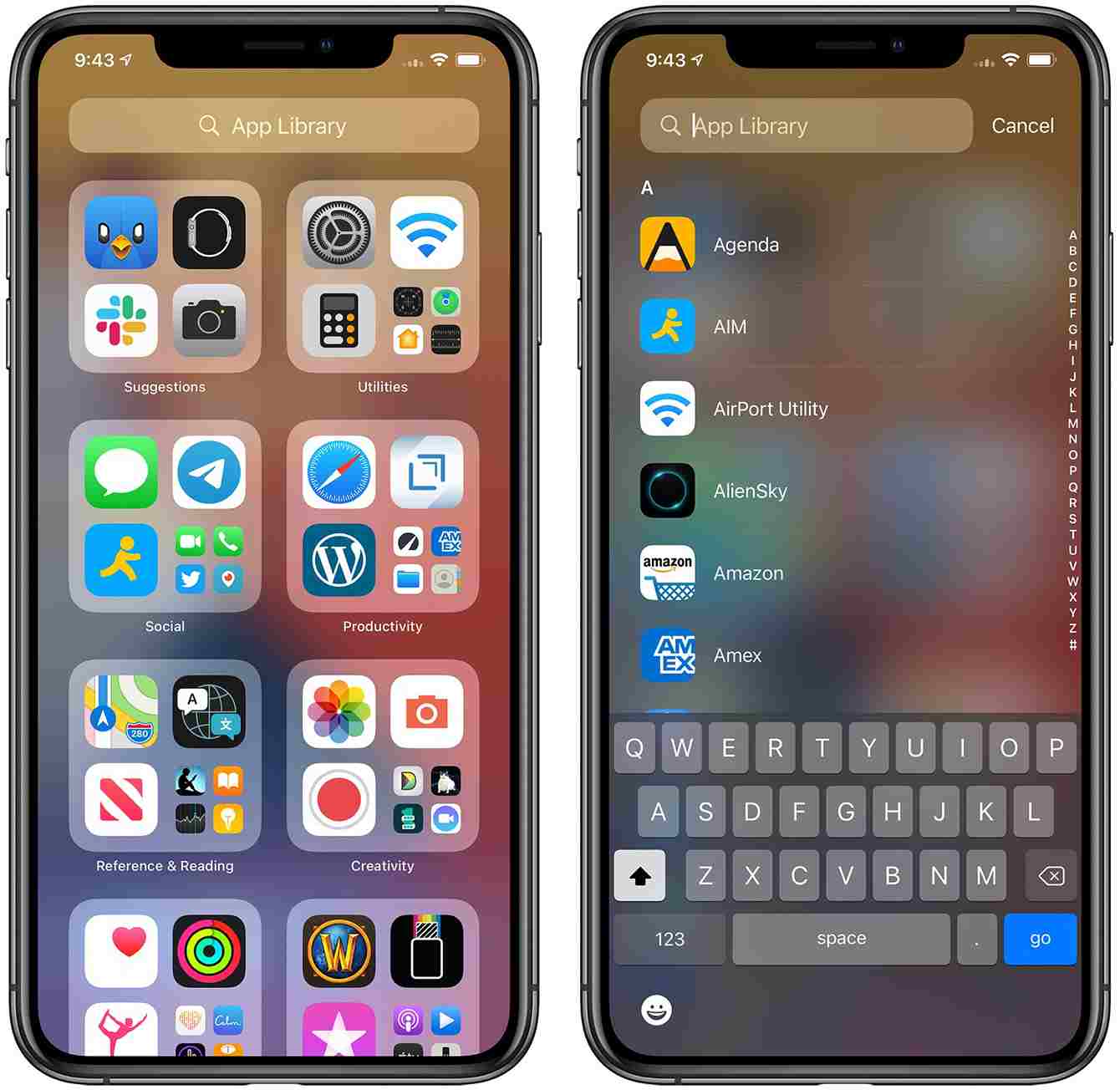 What’s more, you can hide infrequently-used apps to avoid clutter!

The Today View, which is accessible when you swipe from left to right, has been replaced by a scrollable widget UI in iOS 14. You can drag and drop multiple widgets on the Home Screen to get information at a glance without swiping left or opening the app. Choose from small, medium, and large sizes and place widgets wherever you like. 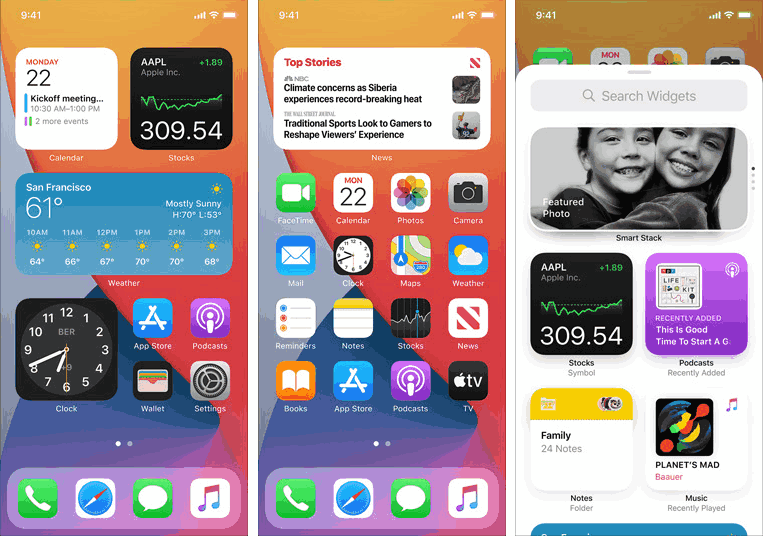 If you have invested in Apple’s smart home platform HomeKit, this improvement will prove extremely beneficial to you. In iOS 14, the Home app offers more automation suggestions. It’s now equipped with advanced controls like on-device Face Recognition for compatible video cameras and doorbells, and Adaptive Lighting for compatible smart light bulbs. 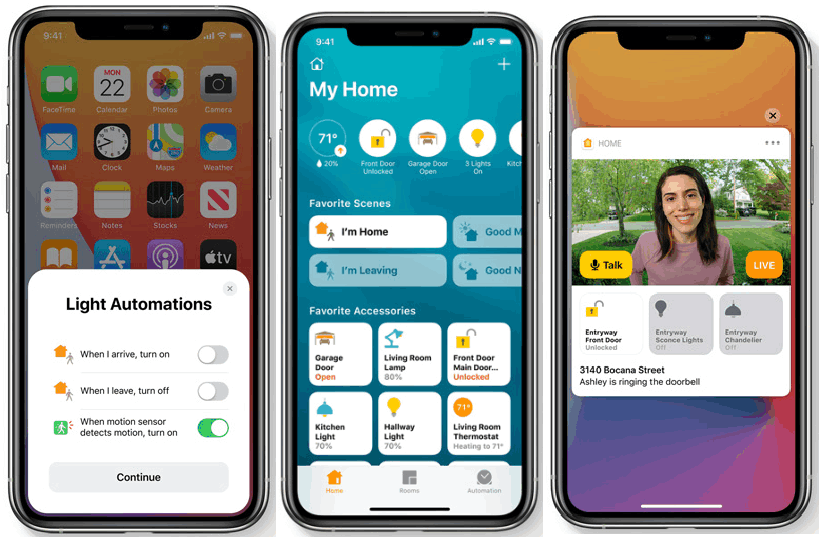 iOS 14 embraces a compact user interface that takes up less screen space than the previous full-screen interface, allowing for multitasking.

In iOS 14, calls from your iPhone, FaceTime, and third-party VoIP apps take approximately as much space as a notification. This way, you won’t lose track of what you’re doing. 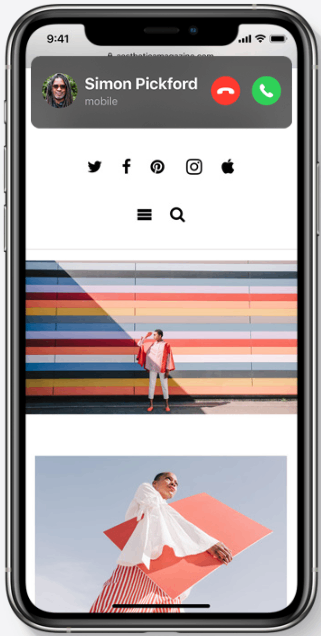 Siri also has an all-new compact design that lets you quickly get information or do things without losing your context. Instead of taking up the entire screen, Siri now pops up at the bottom of your iPhone screen, so you can continue doing what you’re already doing. 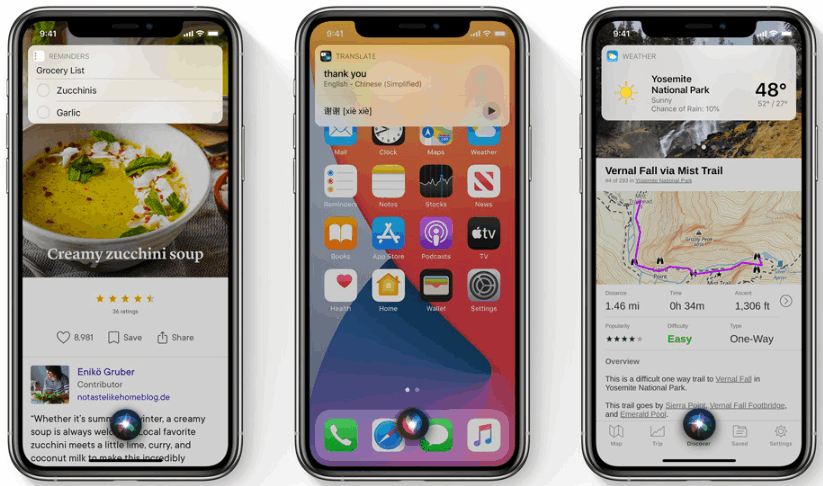 Watching a movie on your iPhone but need to reply to an urgent text or email? Well, now you don’t need to hit the pause button. Apple’s new Picture-in-picture mode lets you use other apps simultaneously as you watch the video or talk on a FaceTime call. 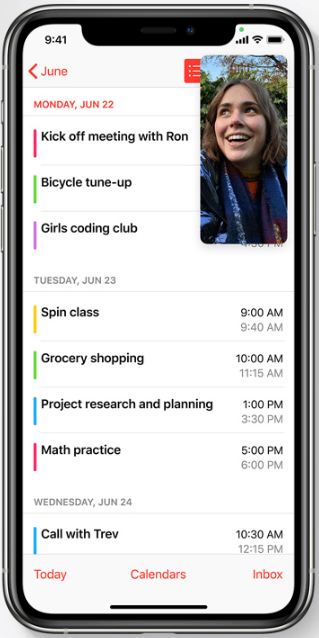 After leaving the main app, you can continue your FaceTime call or keep watching the video in a thumbnail-sized view which you can resize and move to any corner or offscreen. However, only Safari and FaceTime currently support picture-in-picture mode.

iOS 14 brings significant improvements to the Search on the Home screen to provide you the most relevant results. Now simply type a few characters, and you’ll see appropriate suggestions displayed below the search field, making it easier to find what you need. With the new Search, you can quickly launch websites and apps, and search in apps such as Files, Mail, and Messages. 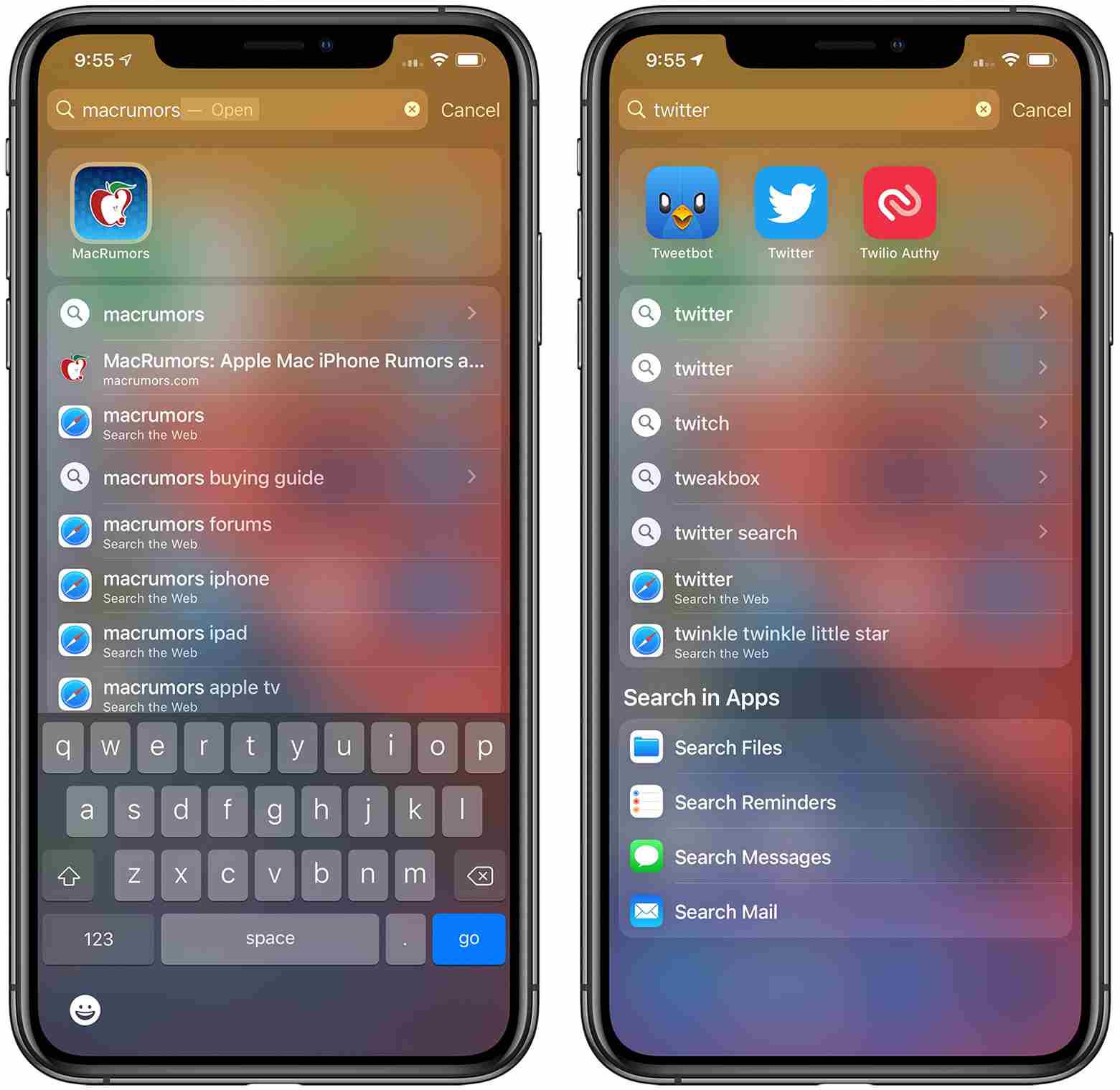 There are multiple useful improvements made to the Messages app in iOS 14, most of which are aimed at making it similar to popular messaging apps such as Facebook Messenger and WhatsApp. You can now pin up to your nine favorite conversations above other message threads, perform inline replies and mentions, and set photos, Memoji, or emoji as a group photo. 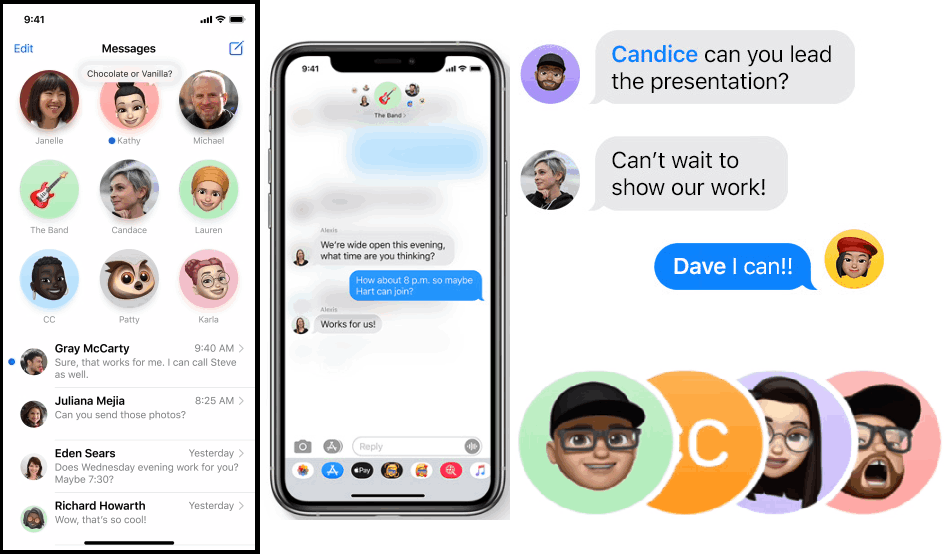 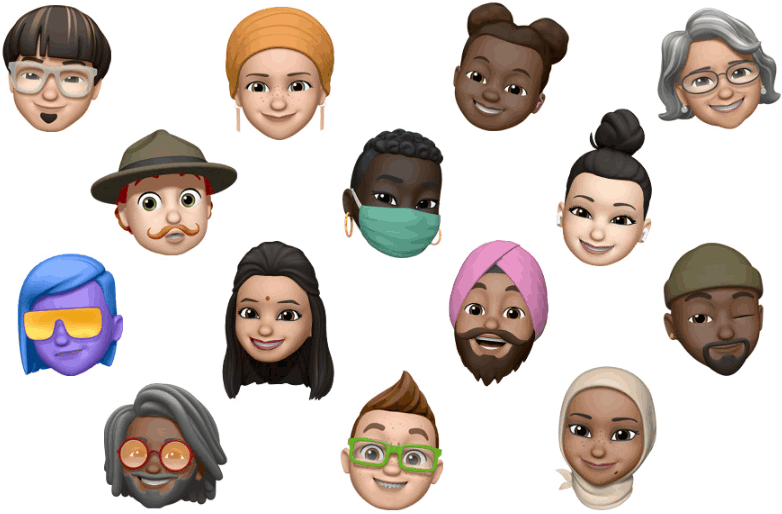 In iOS 14, Apple has made significant improvements to its in-car interface, CarPlay. Car Keys are now accessible from the Wallet app, allowing you to unlock and start your car with iPhone. 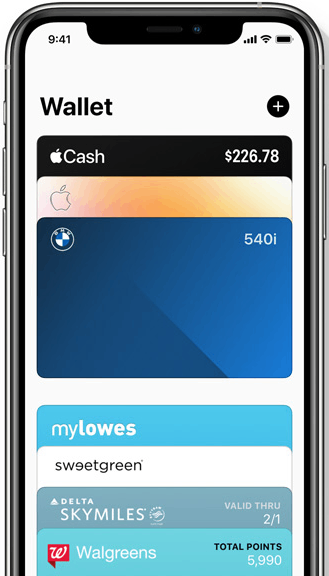 Sharing Car Keys with friends or family has now become easier with restricted profiles and customized controls. Sharing may be temporary, and you can revoke keys anytime. 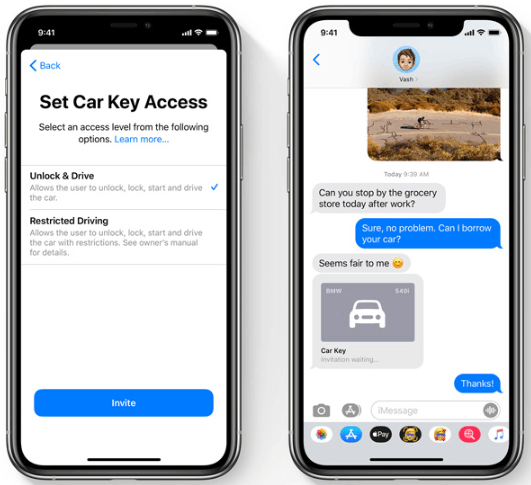 Even when your iPhone battery runs out, you’ll be able to access CarKey for up to five hours. Moreover, CarPlay allows you to set custom wallpapers and support new app types, including electric vehicle charging, third-party parking, and quick food-ordering.

If you’ve got a pair of Apple’s AirPods Pro, this update is for you. With support for spatial audio, iOS 14 delivers a movie theater like sound experience in your ears on-the-go. For both AirPods and AirPods Pro, the new version of iOS supports automatic switching between devices. You can now even connect 2 sets of AirPods to your Apple TV to enjoy shows and movies with your partner or loved one. 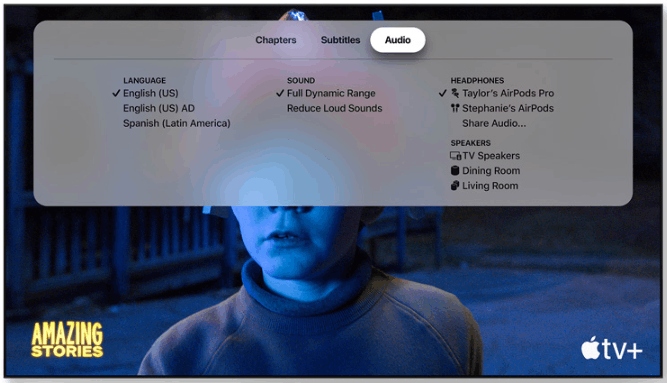 Furthermore, new battery notifications conveniently let you know if you need to charge your AirPods.

App Clips, a new addition to iOS 14, are a small part of an app that’s focused on a specific task and quickly available right when you need it the most. Think of them like a toned-down version of an app that requires under 10MB storage space and gets deleted automatically after 30 days. 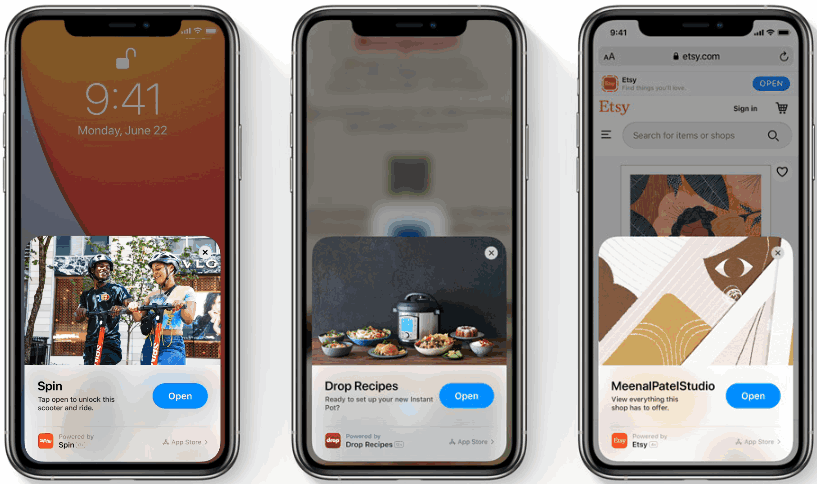 App Clips also support Sign in with Apple so you can quickly pay through apps that use Apple Pay. 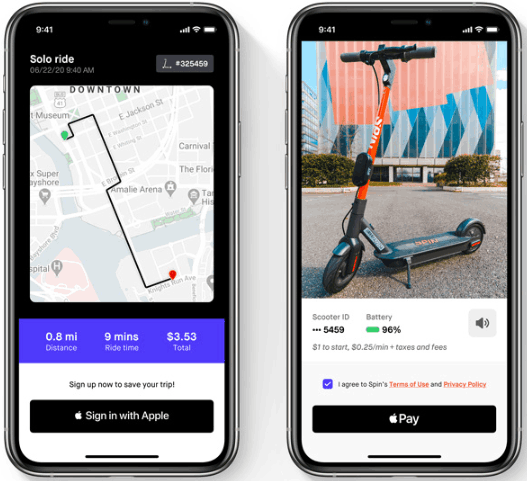 Apple improves privacy with every iteration of its mobile operating system, and iOS 14 is no different. The new version of iOS gives you more control over how you share your data and how apps use it. The App Store now shows you a summary of the privacy practices of the app you’re going to download. 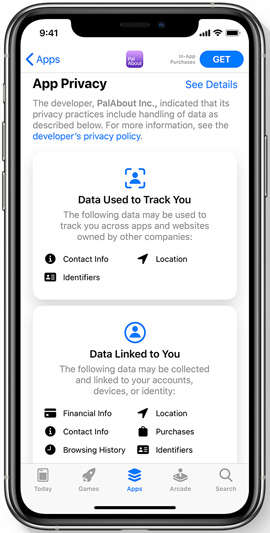 Likewise, iOS 14 displays a recording indicator at the top of your screen whenever an app uses the mic or camera. 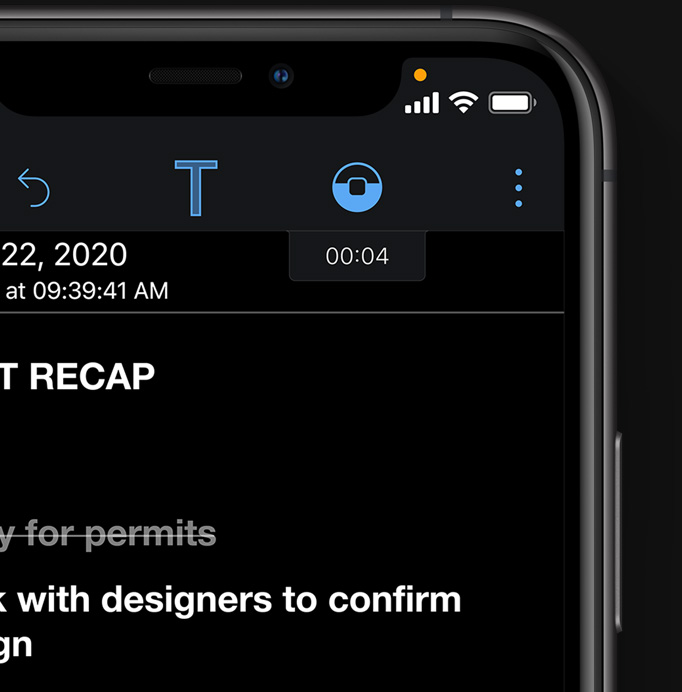 Also, developers can now offer users an option to switch to Sign in with Apple to let them enjoy enhanced privacy and security. 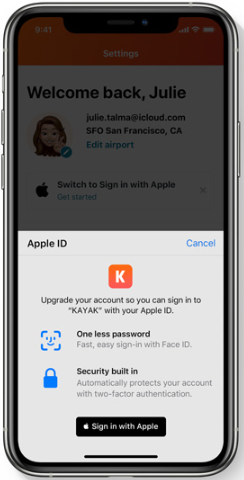 And finally, iOS 14 comes with a new setting through which you can choose to share your approximate location rather than your exact location, with apps.

iOS 14 introduces a handful of accessibility improvements, primarily for VoiceOver – a screen reader for the blind community. With the new update, VoiceOver will automatically recognize key elements, like image descriptions, text within images, and interface controls. You can set up your iOS device to listen out a particular type of sound or alert, such as a doorbell, siren, or fire alarm, and send you a notification immediately.

Starting iOS 14, developers will be able to facilitate users to share App Store subscriptions with other members of a Family Sharing group with a single purchase.

Additionally, Apple Maps now offers you Guides created by a selection of trusted brands and partners to help you discover great places around the world to shop, eat, meet friends, and explore cities. 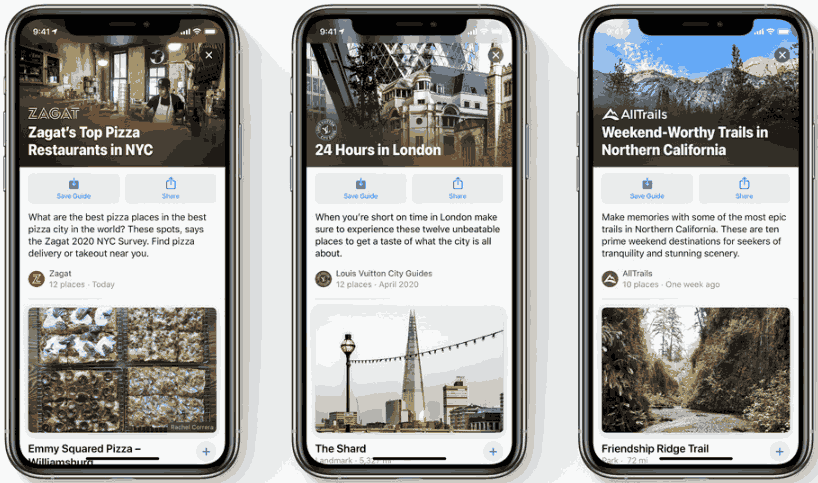 With a direct Game Center integration, Apple Arcade now shows you games that are popular with your Game Center friends. And with the Continue Playing feature, you can continue playing your favorite games across different iOS devices.

In iOS 14, Game Center has been redesigned to make it easier for users to discover and experience games with friends. Now you can quickly access your Game Center profile, leaderboards, achievements, and more right from within your Game Center‑enabled games.

ARKit 4 introduces Location Anchors, making it possible for iOS development experts to place AR experiences at specific geographic coordinates. And what’s more interesting is that users can delight in AR experiences using the front-facing camera, with expanded support for face tracking on all devices with the A12 Bionic chip and later.

iOS 14 introduces the all-new Translate app that supports translation between any combination of 11 different languages. Translate offers three modes, Conversation, On‑device, and Attention, and allows you to save translations in the Favorites tab so you can easily access them later.

Safari, the default web browser in iOS, now features a built-in translation feature that allows you to translate websites in seven different languages. It also automatically monitors your saved passwords and warns you if a password is not secure. Safari is faster and more responsive than ever, and according to Apple, it delivers up to 2x speedier JavaScript performance than Chrome on Android. 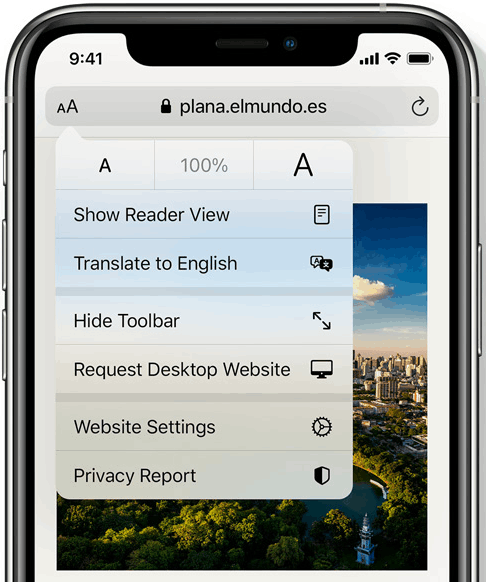 iOS 14 is currently in public beta release, which means there could be severe bugs. If you still want to try out iOS 14, you’ll have first join the Apple Beta Software Program, and then you can experience the iOS Public Beta on your device.

If you’re already registered, sign in and head to the ‘Download profile’ option. You’ll be prompted to download the profile. Once the profile is downloaded, navigate to Settings >> General and tap on profile. A pop up will show up, tap on ‘Install,’ and entering your device’s passcode to confirm. After that, go to Settings >> General >> Software Update and tap on ‘Download and Install.’ That’s It!

So, are you ready for iOS 14? Feel free to contact us if you’re looking for a reliable iOS development company to build or upgrade your app to the latest iOS version.