The Best WordPress Text Editors for Developers in 2022

When it comes to WordPress theme and plugin development, it’s imperative to use tools that improve your workflow. Still, many WordPress developers, especially the new ones, tend to assume all tools are created equal, in particular when it’s about HTML text editors.

However, the truth is that not all text editors are the same, and choosing the right one can significantly affect your coding experience. Since WordPress recommends editing files with a text-only editor, you must avoid these non-text-based editors:

Using any of these programs can corrupt the file you’re editing, causing major problems in your code. This is because these apps add extra formatting to your coding, which means the files won’t work when you upload them to use on your WordPress site.

Whether you are a full-on WordPress theme or plugin developer or an advanced user who edits WordPress files very often, text editors (or code editors) can make your life a lot easier, especially when you’re dealing with a massive amount of code.

So let’s dig a bit deeper and get familiar with some of the best text editors for WordPress developers and advanced users out there, along with details on what to look for when choosing one!

In terms of web development, a text editor is a computer program that allows you to open, view, and edit plain text files. Unlike non-text-based word processing programs such as Microsoft Word and Google Docs, which are built to help you manage and format the presentation of text, text editors provide various tools to make it easier for developers to write, manage and format code.

While word processors insert extra formatting into text files, code editors focus on editing functions for plain text. These code editing programs come with several fabulous features like autocomplete, syntax highlighting, color coding, and error detection, to make programming with large amounts of complex code less of a chore. Specifically built for web development professionals, they usually work with all popular web languages, including HTML5, CSS3, JavaScript, and PHP, and are a must-have component of your web development toolkit.

Why Do You Need a Text Editor?

While WordPress features two built-in editors, called the theme editor and the plugin editor, to let you edit existing files online directly from your browser, there may be instances when you want to edit files offline, create new pages, or elements, or even code custom plugins and themes. The browser-based interface doesn’t prove to be viable in such scenarios, and that’s why you need a professional program to get the job done.

Standalone, downloadable code editing applications are what you need when you’re stepping in WordPress development. With a beautiful, customizable interface, they are equipped with special features suited for developers. Even, some text editors come with built-In FTP support, allowing you to upload the updated files to your WordPress site automatically.

What’s the Difference Between an IDE and a Text Editor?

Even though text editors provide you with a bunch of convenient features to help you write code faster, you still need additional features and tools to make your website or application functional. Some of these are:

Thus, web development IDEs are equipped with everything you need to turn your ordinary code into a fully functional website, application, or program. The recommended IDEs for file editing in WordPress are:

What to Look for in a Text Editor?

When picking a text editor for WordPress development, you should make sure these essential features are either included natively or being offered via an extension:

#Easy-to-use Interface: Be sure to choose a text editor that features a user-friendly interface and is efficient for you to use.

#Syntax Highlighting/Color Coding: The ability to automatically highlight different elements of the code structure and syntax with different colors so that you can easily understand, read, and edit code. This feature also helps you spot syntax errors at a glance, improves code readability, and makes working with code blocks a whole lot easier.

#Version Control: It acts as a safety net, enabling you to roll back a change or see the older versions of your code. This is essential when you’re working on big projects and with other developers.

#Autosave: Losing work hurts, so pick an editor that has an autosave feature to save your changes at specific time intervals.

#Autocomplete and Suggestions: The Autocomplete feature saves your time by popping up suggestions when you’re going to or have started to type. You simply need to press a button to fill in longer code quickly.

#Code Folding/Layout Options: Particularly when working on large projects, look for additional layout options such as automatic indentation and code folding. With these features, you can close up the unnecessary parts of your code and focus on its most important areas.

#Multiple Cursors/Simultaneous Editing: Facilitating you to write code in different places in your code at once, this feature proves to be quite useful when you want to add duplicates of the same tag.

#Target Language Support: Make sure the code editor supports the programming languages you are planning to work with. For top-notch quality CMS development, the text editor must support HTML5, CSS3, JavaScript, and PHP.

#Find and Replace: Make sure the code editor of your choice has a powerful search and replace function to carry out any site-wide changes instantaneously.

#Error Detection: Real-time error checking is imperative to warn you immediately if you write something wrong.

#FTP Integration: The FTP integration lets you access FTP/SFTP servers so you can open, edit, and upload updated files right from the editor.

#Budget: While some text editors below are open source, others cost you money. Consider your budget when going with a premium option.

The Best Text Editors for WordPress Development in 2022

Now let’s get familiar with the contenders for the best text editor for WordPress theme and plugin development:

Developed by GitHub, Atom is a relatively new member of the family of code editors and is suitable for beginners and advanced coders alike. It’s sleek, extensible, and feature-rich, and supports real time code collaboration. With a built-in package manager, Atom allows you to search and install new packages, or you can even create your own within this cool tool.

Other notable features include:

If you’re a true fan of WordPress’ distraction-free writing mode, then you’ll surely enjoy working with Sublime Text that comes with the same feature. Sleek and sophisticated, this handy text editor is designed to let you code in peace and concentration, regardless of the programming language being used in your WordPress projects. Sublime Text is quite similar to Atom, in terms of both appearance and features.

Any list of text editors is incomplete without Notepad++. Designed to be ultra-lightweight, this powerful text editor is well-optimized for performance and uses less CPU power than other equivalent editors. While it can handle dozens of languages, it supports HTML5, CSS3, JavaScript, and PHP – which make it an ideal text editor for WordPress developers. Notepad++ can be a handy tool for expert WordPress developers, but it is particularly helpful for beginners and casual coding.

If you’re a Mac-only user who is looking for a robust, clean, and powerful text editor, Nova is worth checking out. With a surprisingly simple, clean, and well-organized interface, the editor offers you all the essential features that you generally expect from a premium text editor. With Nova, you can open, edit, and manage files locally or remotely through FTP, SFTP, Amazon S3, or WebDAV.

Developed by Adobe, Brackets is a lightweight, yet powerful, modern text editor built from the ground up for professional web designers and front-end development experts. While it specifically designed for HTML, CSS, and JavaScript, you can still open and edit files in other programming languages through extensions. If you’re a beginner-level WordPress developer with a design background, this code editor can prove to be particularly useful for you.

If real-time code-collaboration is what you’re looking for, Codeshare is a worthy contender. In fact, it’s the first-ever text editor to offer this functionality. With communication features similar to skype, this online code editor makes it dead easy for you to work with multiple members of your team. You can also use this fantastic text editor for technical interviews, teaching, and troubleshooting. 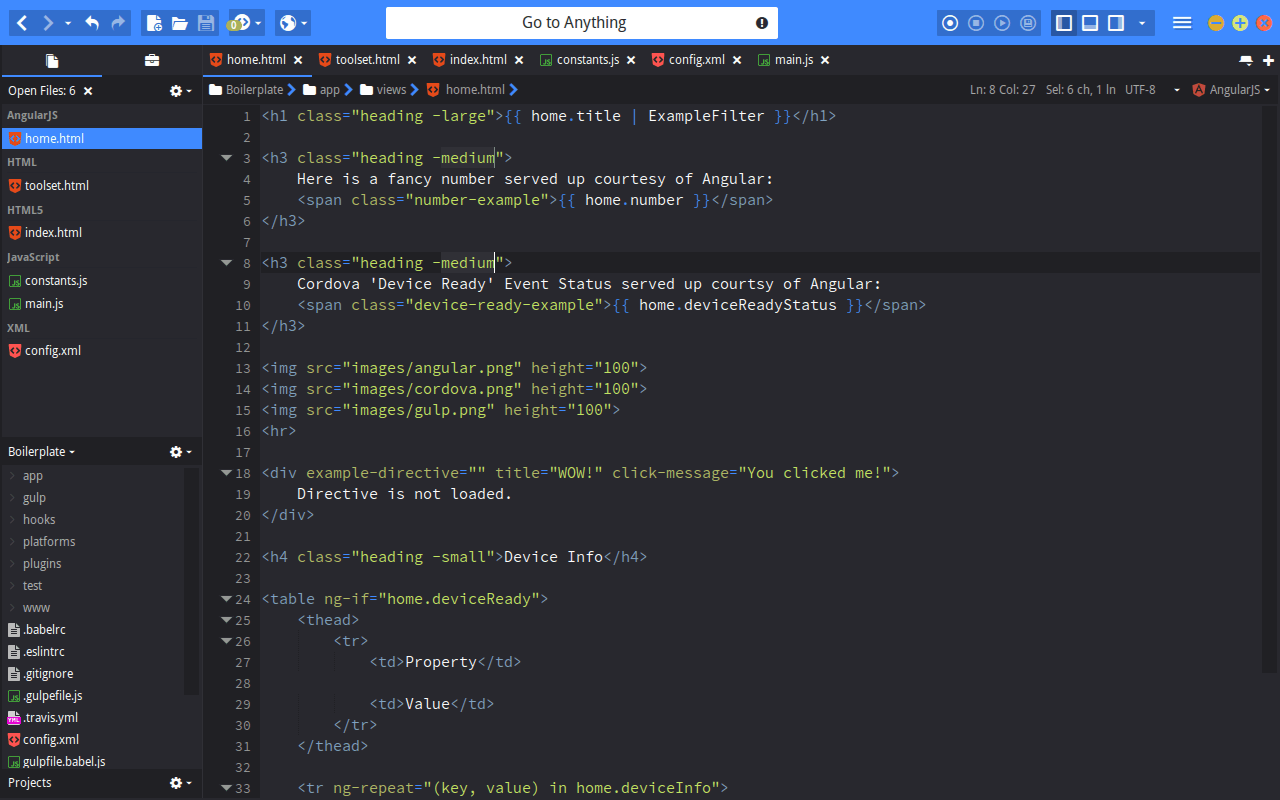 Komodo Edit is a trimmed-down version of Komodo IDE, a popular IDE with advanced features like debugging and unit testing. It is a simple and easy-to-use text editor that supports multiple programming languages and works on most operating systems. Despite being packed with many advanced features, its user interface is pretty straightforward, making it a simple but powerful text editor for WordPress professionals.

Despite its relatively recent release in 2015, Visual Studio Code is the go-to text editor for many WordPress professionals. Developed and maintained by Microsoft, it goes beyond most traditional text editors with unique features such as IntelliSense and Debugging. According to the Stack Overflow Developer Survey 2018 and 2019, Visual Studio Code has been the most popular source-code editor both years.

So there you have it: the best text editors for WordPress development. Although each of them is excellent in its own way, the best one is the one that saves you time and allows you to code more efficiently. Eventually, it all comes down to your specific needs, personal preferences, and type of WordPress projects.