Native vs. Hybrid Apps – What’s The Difference & Why It Matters? 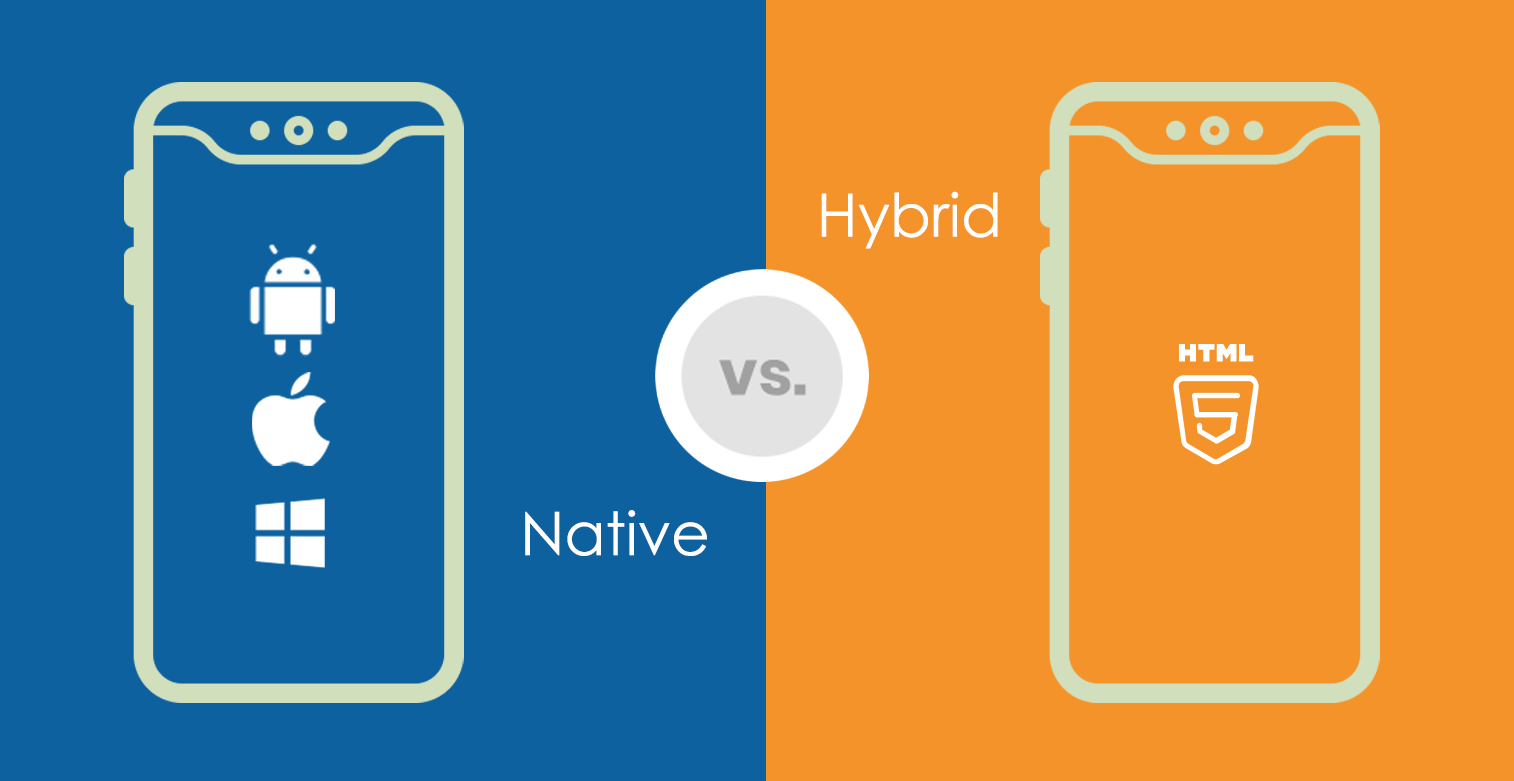 Two of the most common and trendy approaches to custom mobile app development today are hybrid and native. Where native apps are built using the target platform’s native programming language; on the other hand, hybrid apps are created using HTML5/JavaScript and combine elements of both native and web applications. To know which one is better for your project, you need to dive deeper into the native vs. hybrid apps comparison.

Why is it important to know the difference between hybrid and native apps? Because making the wrong move could result in lots of wasted time and energy. Before we delve any further into highlighting key differences, let’s thoroughly understand some of the specific purposes behind each approach.

A native app is essentially an app built to work on a specific platform, for instance, iOS or Android. The app utilizes a particular language to facilitate development on the said platform, such as Java/Kotlin and Objective-C/ Swift.

Can the code be ported to other platforms? Well, that depends on how the original code’s written – it varies from developer to developer, as some keep portability in mind while others don’t. Even if they did, a bit of rewriting is required if you also want the app running smoothly on other platforms.

When you’re writing code for native apps, you have access to all hardware features offered by the native code APIs – this typically unlocks nearly all of the device’s functionality, way more than a web app.

For example, Apple’s push notifications are a perfect example of an iOS-only feature not supported by a web app. It is considered “native” since the code you write is tailored for that specific platform – it revolves around the native architecture of that particular device. So cross-platform compatibility may be a cause for concern, though not explicitly.

A hybrid app is essentially an HTML5 app designed to work with a native platform, such as iOS, within a native environment based on more than merely a browser view to display the HTML5 content correctly. There are additional tools to let your HTML5 app access hardware features that are usually not accessible within the browser sandbox.

This results in better code portability. How? Since you’re looking to port the app to another platform, you will only require a native environment on the other platform to properly run it, while you can port the HTML5 content directly.

Apache Cordova offers a plethora of configurations along with hardware support to boot. However, you might find that the solution does not always work exactly when it comes to different devices. You see, in practice, hacking and testing of particular cases is needed so you can have proper support since an app is much more than a website in a browser control.

Now that you have a general understanding of both native and hybrid apps let’s see how they function. Just to put things in perspective, we’ll take the iPhone as a case example.

How Do Native Apps Work?

The usability you get with Apple’s proprietary UI libraries and device hardware access is quite good, so let’s go ahead and work with “Native” to utilize the UI components. If you’re accustomed to using iPhone apps, the UI experience is pretty much what you’d typically expect from iPhone apps and how they function.

It’s up to you if you prefer having hardware access to graphics for mostly performance (games, for example), or you need access to other proprietary features not supported within a browser sandbox – Apple’s push notifications, camera access, or in-app purchase, etc.

When taking the Native approach, your code doesn’t have as much portability, but on the other hand, it boasts higher performance and more capability on the chosen platform. Your app easily stands out in the app store, and apart from advertising, you can also monetize your app by leveraging an in-app purchase or initial purchase price.

How Do Hybrid Apps Work?

This is where it gets slightly complicated, mainly due to how deployment tools do their job – some of these tools present an environment to run the HTML5 app while others change the JavaScript code written for the platform to native code. As a result, native UI controls are generated.

When you go down this route, you must experiment with your chosen tool’s capabilities (Appcelerator, for example) and test it out thoroughly to determine what the end product can do. These ‘hybrid generators’ continue to evolve as we speak, though their true potential isn’t fully known at the moment or the improvements you might observe in the final product.

The possibility that your app might be rejected at the App Store cannot be ruled out when you deploy it using the hybrid method. However, this decision squarely lies with Apple alone, and their criteria for what’s acceptable or not acceptable isn’t made available in black and white.

A known fact is that each time an iOS update comes out, you cannot access features until your chosen platform starts supporting it. The downside? You’ll be a few paces behind the Native code guys, design-wise, as they get support first, not to mention how you’re relying on a third party to provide the same support.

At a glance (and for quick reference), here are a few key differences to give you a clear verdict on native vs. hybrid apps:

If you’re still stuck in the never ending debate between native vs. hybrid apps, feel free to reach out to our development team to discuss what’s right for you.