Even though we’re still a few weeks away from the final (stable) version to be available for everyone, Android 12 Beta 4 gives us a pretty clear picture of the new features and improvements coming to the next upcoming version of Google’s popular mobile OS.

If you’re curious to know what the final release of Android 12 will be offering you and how it is far better than its predecessor, Android 11, here’s everything you wish to know about the update.

When is Android 12 coming out?

Google usually follows a pattern. The search engine giant has been pretty consistent if you see the timing of Android version releases in the past few years. Below are the dates of the last four releases:

It looks like Google will target a similar release window for Android 12. According to Google, version 12 will reach Platform Stability by mid-August 2021, and it has been successful in doing so. Thus, even though we don’t have a specific date yet, the final public release of Android 12 is expected to release in September 2021.

What is Android 12 called?

Android 12 will simply be called Android 12 – Google confirmed it last year via an Android Developers blog post. The key here is to keep things more formal. That’s the reason why Google is using a basic numbered approach instead of pushing sweet internal codenames it used previously. However, according to XDA Developers, the largest mobile software development community, Android 12’s internal dessert name might be Snow Cone unofficially.

What are the new features of Android 12?

Android 12 will also bring many new features and improvements to the operating system like all previous releases. Here is a list of the confirmed features so far:

The upcoming version of Android introduces the most significant design change in Android’s history. Android 12 comes packed with a new theming system, Material You, the next iteration of the operating system’s Material Design language. As a result, Android 12 is more dynamic, expressive, and personal than ever before.

The key highlight here is customization; you’ll be able to personalize your phone entirely to your taste with redesigned widgets and a custom color palette. Google calls it color extraction, where you choose a wallpaper, and the system automatically determines and applies the most dominant, complementary, and best-looking colors from it across the entire OS, including the lock screen, volume controls, the notification shade, new widgets, and more.

And the best thing? You can even pick a theme color manually!

From the moment you upgrade your device to the twelfth major release of Android, you realize that it responds quickly to every tap, swipe, and scroll with smooth motion and animations. For instance, dismissing notifications on the lock screen turns your clock out to be larger, so you can understand you’re all caught up.

According to Google, this has been achieved by some under-the-hood improvements, including:

Altogether, due to simplified interactions and a recrafted underlying system, the new version of Android offers users a more fluid and efficient experience with better power efficiency.

To help you get things done quickly, the twelfth release of Android has revamped some of the most frequently used spaces on your phone, including:

Android 12 has put privacy at the center of the operating system. Not only is it more transparent about apps accessing your data, but also it gives you more controls about how much private information you can share with your apps.

Moreover, the new Android Private Compute Core keeps all the audio and language processing on-device, separated from the network to tighten up your privacy.

The autorotate feature has become faster and more accurate on Android 12. The operating system now uses the front camera to detect the user’s orientation and face before triggering the screen to rotate when the auto-rotate feature is enabled. 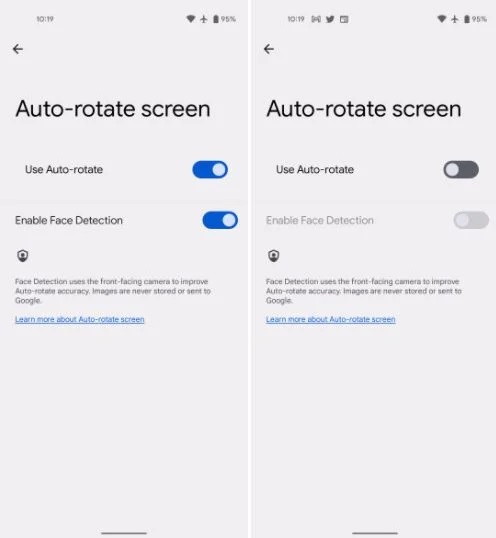 Now say goodbye to the annoying issue of your phone getting confused between landscape or portrait when you switch your position or even turn the phone a bit!

It’s here, finally! Android 12 natively supports scrolling screenshots, allowing you to capture more in one go instead of taking multiple images and stitching them together. If the view is scrollable, you’ll see an option to “Capture more” that lets you snap the full available content. 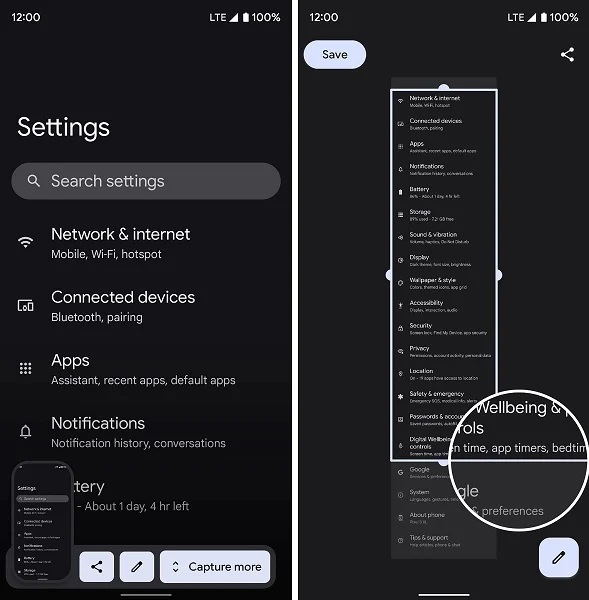 Your gaming experience is going to get an overhaul with Android 12. With Game Mode APIs, Android app developers can prioritize certain device functions, such as better performance and longer battery life, within their games to get the best frame rate possible. As a result, if you select a performance or battery-saving mode via a user-accessible overlay when playing a game, your game will adjust to your settings accordingly.

Another most impressive update is “play as you download,” which allows you to play the game while the game assets are being downloaded off the Play Store. You won’t have to wait for the download to finish before playing the game for the first time. It’s great for games with large file sizes and people with slow networks.

In Android 11, you see round icons when you pull down the notification shade. Google has removed them in Android 12, and they have been replaced with large text tiles that are much larger than icons on Android 11.

Android 12’s Quick Tiles has a rectangular shape with rounded corners. They are quickly accessible, easier to tap and look elegant.

Many Android smartphones have the option to switch to the one-handed mode, but the ones running stock Android never had that option until Android 12. Even iOS now supports one-handed mode. After realizing it, Google has made one-handed mode the part of the Android 12 features list. This feature is specifically handy for larger mobile devices. 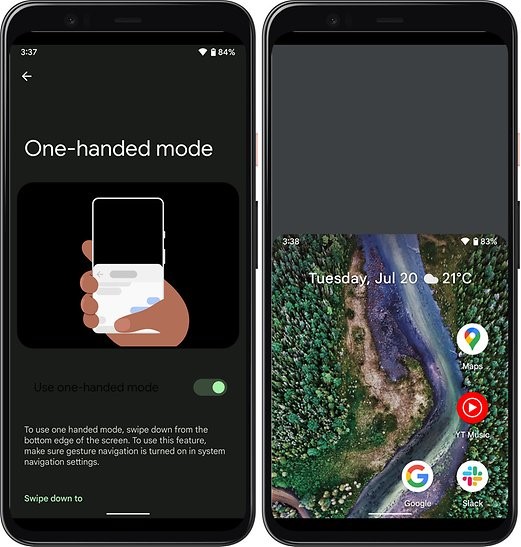 However, you have to enable this feature first in Settings, after which you can trigger it by swiping down near the bottom of the screen.

Who will get Android 12?

How to Get Android 12 Beta Update?

To install Android 12 on a compatible device, you need to first enroll in Beta. Simply follow the below steps:

That’s all about Android 12! Feel free to get in touch with us if you’re looking for a reliable Android app development partner to develop or upgrade your app to the latest version of Google’s popular mobile operating system.